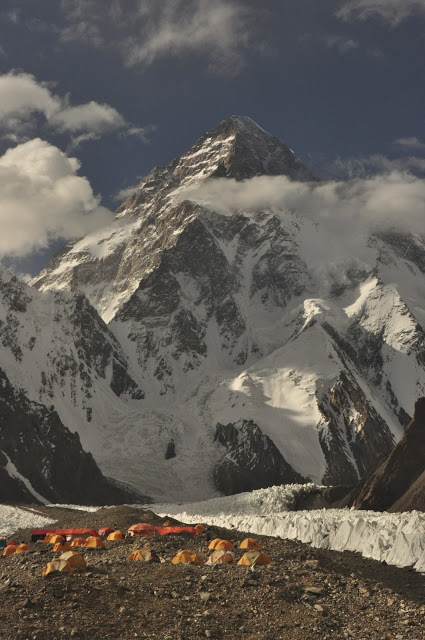 David,  I never tire of looking at that picture just as I never tired of staring at K2.  It is the most beautiful mountain in the world.  That campsite, although it appears to be on a rock spit, is on the glacier (the middle is the most stable area).  The rock layer isn't very thick and it moves constantly.  My tent in basecamp was unrecognizable as the floor had melted out beneath me by the end of the expedition.  It is a common malady.

The elevation at basecamp was 15000 feet give or take.  The summit was 26,400 feet.  Our camps were at 17k, 20k and 23k (some chose to put up a camp 4 a little higher).  Those snow structures on the right of the picture were part of the glacial rivers running beneath them and had to be crossed before ascending the mtn.  I called it the :Labyrinth because it was like a maze.  A dangerous maze.  It took us one hour from basecamp to reach the mtn because of it and the route through there changed daily due to melting etc.

Teammate Scott Powrie took this shot from our basecamp on a rare day that K2 was behaving.  Since I lost my camera and pics I wanted to share his.